David Waller, Electrical Manager at Panks, is enthusiastic when he talks about his job and the work Panks do for Anglia Water Services. 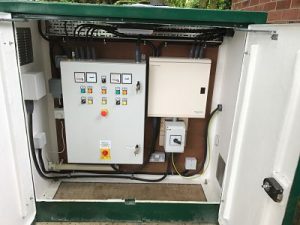 “I find it really interesting. Within the general public no one really thinks about the infra-structure behind our water services; you just pull the plug out of the sink and the water’s gone but you don’t realise the amount of work and systems making that happen. It’s fascinating.”

“At Panks we do a lot of work for AWS as part of their framework. I find it enjoyable because every job is different. Whenever we go to a different pump station there are different things to take into account. Fundamentally it’s the same, but every job presents its own challenges.”

“Not only do we do electrics, we also do the mechanical installations, as well as looking at bespoke installations. We are very keen to have the opportunity to take into account everything else that is involved in a project, from the ground up, to make sure it’s as beneficial as it can be for the customer.”

The March 2017 electrical upgrade to AWS Wickham Skeith’s pumping station was a fairly typical type of job for David and his Panks team of engineers.

Initially contacted by an appointed service provider Imtech Environ, who carry out the test and inspection of electrical installations for AWS, Panks were approached to carry out the replacement of the electrical insulation at the small pump station which was outdated and no longer serviceable, on the Norfolk-Suffolk border near Diss.

To initiate the project planning process, David discussed the project requirements with Imtech Environ and the AWS site personnel to discover the extent of the works – and to ensure the end-user was presented with his required specification.

Alongside the electrical upgrade, to ensure compliance with the IEE regulation BS7617 17th edition, it was decided to maximise the asset reliability for AWS. Panks were also asked to build and supply a new purpose built pump control panel complete with control instrumentation and safety requirements to operate the two pumps at the site.

Overall, the full scope of works in this £16K project involved installing a GRP external kiosk to house the new main fused board with standby temporary generator hook-up; site lighting externally and internally; new condensation heaters and full site containment with metal tray work to keep it neat and tidy – typical of Panks commitment to high standards of completion.

Alan Smith, Contract Supervisor at Imtech Environ said “We were very happy with the work and certification provided by Panks. I’ve already booked an appointment for them to look at another job for us – and obviously we wouldn’t do that if we weren’t pleased.”

David Waller explained some of the challenges particular to the Wickham Skeith project:
“The pump chamber was approximately 5 metres deep but due to space constraints I was limited to two engineers on site. We had a tight timescale to work within and needed to ensure the station remained operational throughout.”

“Another potential problem we have to overcome is the weather. During high rainfall the water coming into the system increases considerably and we have to sometimes stop work because both pumps need to operate to maintain the required water levels in the in-coming sewer tanks. This action puts more pressure on meeting the completion date and a financial restraint.”
“But we were lucky with the weather this time.”

David liaised and co-ordinated with various agencies including UK Power Networks service provider to isolate and reconnect the power, civils provider to provide a concrete plinth for the external kiosk to ensure the 4 week timescale on the project was met.

“At Wickham Skeith the flow rate into the station is low at roughly a litre every 1 minute which is very little compared to some of the pump stations we have taken on for AWS,” David explained, which is not always the case:
“I recall at Kings Lynn we had three pumps pumping in excess of 100 litres per second across a river to a sewage station. I remember my first visit to a big sewage station. I was in awe of the place…all this water coming through here constantly and its every day, 24 hours a day, all these systems behind the scenes keeping the water services flowing….it’s massive!”
It is clear David is looking forward to dealing with the challenges his next project at Panks will bring.

Send to a colleague Share this page
Need something similar? Talk to us
Not only do we do electrics, we also do the mechanical installations
Our client(s)
Electrical Etc