If holiday-makers at Norfolk’s Center Parcs in Elveden heard a noise in the night in August 2016, there was nothing for them to worry about – it was just Panks ensuring their Center Parcs holiday experience remained as top grade as ever.

The gravity-fed pump feeding the Tropical Cyclone, possibly the park’s greatest attraction – which pumps out 25,000 litres of water a minute and is designed to emulate rafting three of the greatest rivers on earth – needed an overhaul.

So under the cover of darkness, to minimise disruption to the site and to ensure the raft drop water-ride was functioning for the first swimmers of the day, a service team from Panks engineered the switch between the existing Vogel pump and the onsite partner pump or spare.

The end suction centrifugal impeller pump is responsible for the ride’s functionality, pumping the water from holding tanks to the top of the 18 metre high swirling Cyclone for holiday-makers to ride down.

Center Parcs had approached Panks with a problem, the pump was suffering from corrosion and they needed a long-term and reliable solution.

In this £5000 project workshop, manager Mark Jackson undertook research with various companies and eventually decided that an epoxy based coating would be the most cost-effective and suitable solution. Mark said:
“It was the first time we had ever tackled a project like this. The customer’s request was for us to look at how we could protect parts and stop them corroding. So we found the answer.
“We know it’s the relationship you have with the end-user that’s important; we listen to what they need and we make sure we give them the best service possible.

“In this case instead of the customer having to purchase new expensive parts and new pumps we knew we’d find the best way to repair and protect the existing pumps to create longevity and maintain efficiency.”

After the 300kg 2 metre long bare shaft pump was removed, it was loaded onto Panks’ flat-bed truck using the truck’s own crane and delivered back to the workshop for inspection.

The workshop team stripped the pump using the bespoke overhead 3.2T workshop crane into a component form. Each part was analysed and measured to determine how much corrosion the pump had suffered and a customer report was prepared. Mark provided a quote stating what parts needed to be replaced and what parts needed to have the epoxy coating applied to them.

The hydraulic end showed signs of water damage and corrosion and drawing upon his knowledge and diverse skill-base Mark used the epoxy coating to seal and preserve the castings, negating the need to replace parts with new.

Initially the pump bowl, main seal housing and rear seal housing were sent away to be grit-blasted to a specific grade and quality to provide a clean key for the epoxy based product to adhere to.

The application of the epoxy coating was precision work because Mark’s team were working to tight tolerances between the rotating impeller and the stationary impeller wear rings.

Three different epoxy coatings were applied, by hand, to a specified thickness, using specially crafted hand-tools and profilers to ensure the working tolerances of the pump. Firstly a metal grade was used to fill any indentations and to provide the optimum smooth surface for the subsequent two protective coatings.

In Panks fully-equipped workshop the drive-end of the pump was inspected and over-hauled. The mechanical seals were refurbished, with engineers replacing O-rings and lapping the seal faces to within microns. They also machined a new stub-shaft sleeve as corrosion had caused some pitting and the mechanical seal to leak.

The pump unit was reassembled before under-gong a hydraulic static test to test joints and seals. A final coat of blue paint provided a ‘good-as-new’ finish and within two weeks the pump was delivered back to Centre Parcs to await its next turn to power up the Cyclone,

Center Parcs were so pleased with the end product and service provided by Panks that a further £20,000 contract resulted, with Panks workshop team repeating the overhaul process on the four Herborner pumps which keep the water flowing on the outdoor White Water Rapids.

Send to a colleague Share this page
Need something similar? Talk to us
It was the first time we had ever tackled a project like this. The customer’s request was for us to look at how we could protect parts and stop them corroding. So we found the answer
We'd love to talk 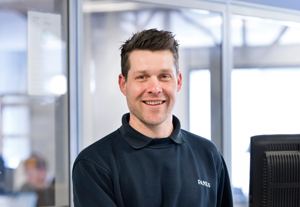 Mark Jackson - Repair Workshop Manager If you have a pump in need of repair - whatever condition your pump is in - just drop me an email below or give me a call. You can be sure I'll do my utmost to help.